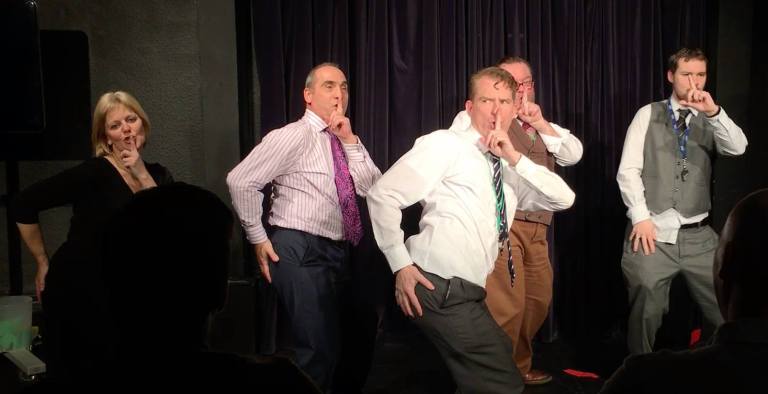 The House On The Hill:  LoveHard are excited to be bringing back their award-winning Edinburgh Fringe show to their hometown of Birmingham for ONE LAST TIME.  A great part-scripted, part-improvised show.

The Noise Next Door:  Eight time sell-out veterans of the Edinburgh Fringe Festival bring their Uproar Tour to Nottingham.

Ministry Of Improv: Entertainment from the unofficial non-government fictional department for improvised comedy.  Part of the Tamworth Literary Festival.

Improv Jam:  Free show where all improvisers are invited to come up on stage and play.

The Improv Musical: After several sold-out shows at Warwick Arts Centre and three
successful runs at the Edinburgh Fringe Festival, The Improv Musical is back in town for another performance.

Improvabunga:  A murder mystery special. All old flames, new business partners, and mysterious strangers are invited to the last and greatest party.

Fat Penguin:  Free improvised comedy show in Birmingham with support by a headline act from one of the UK’s top improv troupes.  Headlining this month: Lester City

Gorilla Burger:  Regular Nottingham show where everyone is welcome to take part, simply by putting your name in a hat.

Improvabunga:  A cop show special.  We’re back for one last case, a case to go out on and we want you along for the ride.

Previously On: Join some of Birmingham and London’s most exciting performers for the final episode of a television series that was never broadcast.

The Noise Next Door:  Eight time sell-out veterans of the Edinburgh Fringe Festival bring their Uproar Tour to Sutton Coldfield.

UON Improv: Join these intrepid performers for games and scenes the like of which have never been seen before, and will never be seen again! There may even be a seasonal surprise at the end…

The Noise Next Door:  Eight time sell-out veterans of the Edinburgh Fringe Festival bring their Uproar Tour to Shrewsbury.

Paria Theatre: Nottinghan’s favourite two-prov is back for one night only.  Inspired by an audience question, this show mixes theatre and comedy in pursuit of an answer.

Box Of Frogs:  Monthly show in Birmingham’s Jewellery Quarter with all your favourite improv games.  Absolutely free, with their usual cast iron guarantee – ‘laugh, or your money back!’

MON 20TH – UPSTAIRS AT THE WESTERN

Uncle Armando:  A guest stand up comedian improvises monologues, based on your one-word suggestions, and our players will then improvise brilliant scenes based upon them.

Improvabunga:  A science fiction special.  All we know is it’s the future and it’s a brave new universe and we’re going to forge this future as we go.

Nottingham Variety Show:  The University improv group will perform as part of a showcase in aid of Mind.

The Noise Next Door:  Eight time sell-out veterans of the Edinburgh Fringe Festival bring their Uproar Tour to Bromsgrove.

Box of Frogs:  More games, songs and silliness from the Birmingham based group.  Part of NAF Cafe, a showcase for local art.

Have I missed a show?  Get in touch and let me know.