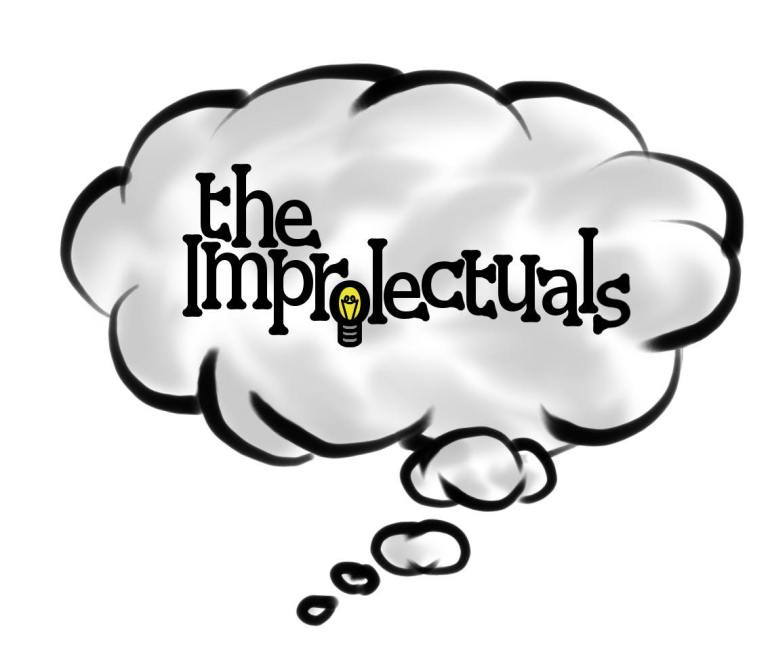 The Improlectuals are an improv supergroup who come together to create slick comedy sketches.  In this performance there was Richard Baldwin (Wow Impro), Robert Lane (Foghorn Unscripted), Matthew Dibbens (Coventry Impro) and Nathan Blyth (Birmingham Rep), each one bringing their different comedic strengths to play in this satisfying full length show.

The show is made up of a mix of quick-fire sketches, each one following a set comedy format.  “ABC conversation” had two characters starting each sentence with alternating letters of the alphabet, in this instance holidaymakers endangered by a volcano.  “Dolphin trainer” had a lone performer on stage using just audience boos and cheers to guide him into performing a secret task they had chosen in advance (the Macarena).  “Lines from a hat” involves the performers taking lines of dialogue written by the audience before the show and fitting them into a single coherent scene.  From the off it was clear to the audience that they were in safe hands, with confidence and energy on display from all performers.  This reflects the years of experience on stage and an understanding of what makes a good game work well.

Each performer had several great moments in this show.  Richard’s wordplay was a joy throughout, most impressively during the unhappy bride song which rhymed “mental health” with “on the shelf” which fit the scene perfectly.  Robert kept the scenes coherent and grounded, explaining away apparent inconsistencies so that the comedy could grow organically from what had come before.  Matthew played with the fourth wall and was wonderfully honest on stage, admitting in one scene he was just copying everybody else and he didn’t have any other ideas.  And Nathan showed off a wide range of characters using great physicality and accents throughout.  Overall, a great blend of performers who worked together well to create a great night of comedy.

3 thoughts on “REVIEW: THE IMPROLECTUALS”