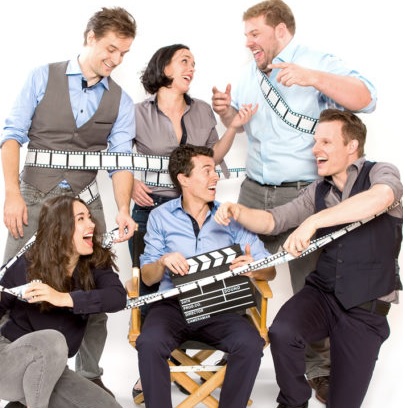 “The Play That Goes Wrong” is a hugely popular and successful show.  It’s won an Olivier and a Tony and been performed all over the world, from South Africa and New Zealand to India and China.  And now the original cast and creators have created a new show which is different every night.  A one act tale based on a title and movie genre supplied by the audience, taken from an imaginary DVD library containing every possible film.

In this performance, the film was a old-fashioned mummy movie called “How I met your mother”. The hero of the tale was Bartholomew, a historian who wanted to prove the truth behind the legend of Pharaoh Gaia. He believed Gaia had killed his mother when she went looking for the tomb 40 years earlier. His fellow historians at the British Museum thought such stories were poppycock, mocking him and refusing to fund any expedition. A rich widow put up the cash instead, and so Bartholomew, the widow and her two sons travelled to Cairo finding the tomb, avoiding traps along the way and putting the mummy to rest. Bartholomew ended up trapped in the tomb himself, though the mummy was brought back to the British Museum proving the legend to be true just as he had believed.

This is a high quality improv display. Every scene had great moments and all the performers had fun throughout.  The songs were clear and strong with some great rhymes on top of the keyboard & percussion. A special mention must go to the sound and lighting, creating a dark and gloomy mummy’s tomb and adding a echo effect to every dark word spoken by the movie monster.

The key element to this show was the director, watching along with the audience and calling out any mistakes or confusing elements introduced by the cast. Such slip-ups are inevitable in any improv show and often quietly forgiven by the audience. By highlighting these odd moments and forcing them to be explained these bugs were turned into features, acknowledging what the audience had already noticed and adding more laughs along the way.

Even without the director’s involvement, a strong sense of story came through from this talented cast. In the final scene a pocket knife mentioned earlier was used to destroy the book of legends that had been present throughout. The legend told in the book in the first half of the show was used to defeat the mummy in the second half.  And the promise to reunite Bartholomew with his mother was completed when he met the same fate as her. All of those individual scenes which had felt silly and fun at the time were cleverly reused and combined to create a unified whole.  A very satisfying show.